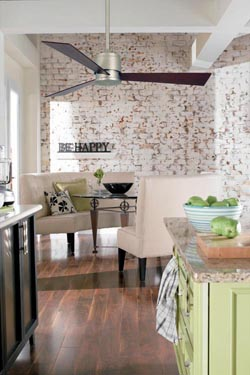 For a while, ceiling fans became an undesirable component of a room’s décor. However, with more modern, sleek, and efficient fans, they’re experiencing a resurgence in popularity for their versatility and aesthetic. If you’re considering adding a fan to your home, here are some trends we’re seeing today:

Adding lights to your ceiling fan doubles its value to your room. Rather than simply circulating air, it now can create mood lighting.

Instead of a wall-mounted control unit, many manufacturers are opting to include remote control functionality. This removes the need to get up to change the speed as well as eliminating unsightly strings or chains from the fan itself.

Many popular fans have two distinct design elements that often have opposite styles. For instance, a fan with dark mahogany blades could be mounted on a brushed silver motor, creating a juxtaposition of industrial and classic. Other combinations can include a traditional fan mounted on an ornate ceiling mount that acts as the focal piece of the design.

As fans become integrated into our homes again, some want to dip a more measured toe into the ocean of fan options. Stark white fans are still a popular choice for those who want the cooling effect of air circulation but aren’t ready to make a fan a design centerpiece. The white blades and motor blend easily into white ceilings, making a discreet statement.

No matter what style you prefer, Hortons has a wide selection of fan styles, manufacturers and mounts to help you find the perfect fit for your home.